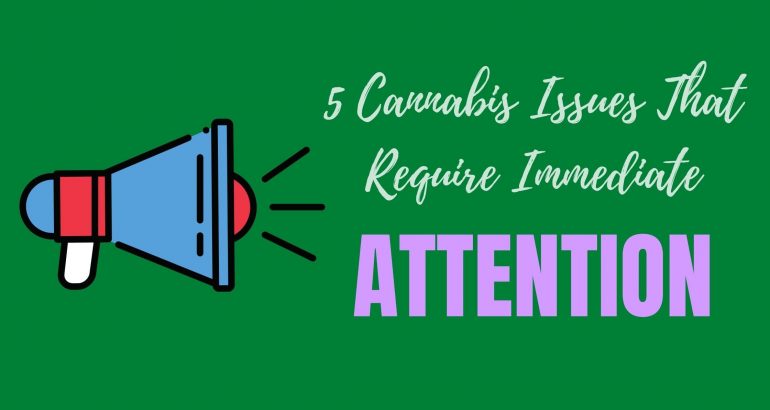 California was the first state to legalize cannabis and since then many states have followed in its footsteps. As of now, more than 40 states in the US have legalized cannabis either in some or the other form. These actions also enable lawmakers to ponder over the existing marijuana policies and decide whether or not they should legalize cannabis on the federal level.

With a significant majority of Americans and Republican voters favoring the therapeutic properties of cannabis, looks like the tide is in favor of the cannabis community. Nonetheless, cannabis is still illegal on the federal level and the cannabis industry still faces a lot of challenges. Here is a list of the top five cannabis challenges that require immediate solutions.

Not all states in the US have legalized cannabis. Some states still stand against the legalization of marijuana. Be it medicinal or recreational, these states have yet not jumped on the bandwagon of legalization. Of these states, some states will soon legalize cannabis for medicinal purposes. As for complete legalization, the cannabis industry has a long way to go.

With the recent elections at the peak, some candidates have made their intention regarding cannabis quite clear. They support cannabis legalization in some or the other form. As for non-supporters, their decision will definitely falter the entire picture. Despite all the discrepancies, more than half the American population can access cannabis using an MMJ card in Murrieta or other legal states freely. So, it looks like people will definitely support the cause and be in favor of those who support cannabis legalization in the on-going elections.

One of the major issues for the cannabis business is access to a proper banking system. You see, cannabis is still illegal on the federal level and banks cannot provide loans or deal financially in anything that is still illegal. Even though some states have legalized cannabis completely, federal status overshadows everything else. The only exception in this case if the Hemp Farm Bill. The bill became a law in 2018 and since then hemp-derived CBD has been legal in all 50 US states. This also means that businesses dealing in hemp can access banking services instead of storing cash in bags.

However, the scenario for other marijuana businesses still remains the same. The vast majority of banks in the US deny dealing with cannabis businesses. As a result, major firms and companies have to keep or carry huge chunks of cash. Making them a prime target for robbery or theft. The tax deduction is another major issue due to the different legal status the marijuana companies have to pay double tax. So, cannabis banking is a major issue and it requires immediate attention.

Marijuana federally illegal status causes yet another problem. The scientists and researchers cannot study the cannabinoids with complete freedom and free budget. The University of Mississippi is the only research site that carries out cannabis research. And the kind of cannabis plant grown in the research center bears no resemblance to the products sold in the market.

All in all, cannabis is not an easy subject to be researched and studied in the US. you have to take special permissions or work at the Mississippi University in order to study the cannabinoids of the cannabis plant. This legal structure also poses problems for the future of medical cannabis.

We have a limited no. of studies that suggest medical cannabis use for certain conditions. Lack of data and cynical studies drives people away from the potential medical advantages of this magic herb. Of course, illegal status is the main problem, but research facilities also have a hard time studying cannabinoids.

The illegal market flourishes even after several states legalized cannabis both medicinally and recreationally. There are hundreds if not thousands of illegal marijuana businesses running nationwide. The illegal cannabis market thrives because of high taxes imposed on cannabis, loopholes in the existing laws, and unregulated supply in legal states. This shows that the black market has several ways to thrive and ensure maximum cannabis sales.

What’s more surprising is that no. of illegal stores is getting out of control in states such as California. As a matter of fact, state taxes are so high that it is natural for people to shift towards the black market. Also, if you take a closer look at the reports more than 200 dispensaries work on temporary licenses. With California marking a record of highest no. of illegal dispensaries. It is also believed that there are at least seven illegal stores for one legal dispensary in the Golden State.

The only problem that persists is the tax structure and illegal status on the federal level. While cannabis businessmen demand properly structured tax policies, legalization will enable all the businesses to flourish legally. It seems obvious that we do not see that coming any sooner, but tax reduction will definitely benefit a lot of people and allow them to work in accordance with the existing law structure.

Racial injustice has always been a topic of discussion in the US. it restricts people from opening up cannabis businesses. And the main reason behind this problem is that most cannanprenuers are white people, high or middle-class men. In fact, the Farm Bill also comes with certain stipulations preventing many people from running hemp businesses freely.

According to the bill, anyone convicted with drug felony in the last ten years is not allowed to enter the legal hemp industry. Unfortunately, this rule oversees the fact that the main problem lies within the black market in California and other states. The hemp cartel has never been a part of the illegal bracket.

In addition to this, growing racial discrimination in America calls for a magnificent change. If you closely look at the cannabis market owned by 5% of the African-Americans in Detroit, it may not come as a surprise that with time many black owners will have to close or sell cannabis at a very low price. Also, social and racial disparity has caused owners to face problems with the legal authorities. It’s a sad fact and not many people are working towards solving this issue.

The only solution to this problem is to address racial discrimination and open the cannabis market for black people. Another issue that concerns the tax and banking sector will be automatically solved once cannabis is legalized on the federal level. Unfortunately, it is too early to say whether the issue will be dealt with in 2020.

In light of the COVID pandemic, we advise all our patients to see a doctor online instead of visiting the clinic. Help us flatten the curve by opting for an online 420 evaluation.

You will receive your medical card in PDF format in 10 minutes by email. An embossed hard copy is sent by mail.

Rather apply by phone?

"I got my recommendation from here. The process is quite easy and took me just a few minutes. The medical health professional is amazing. He not just evaluated my condition but even suggested me strains that could be beneficial for my condition. "